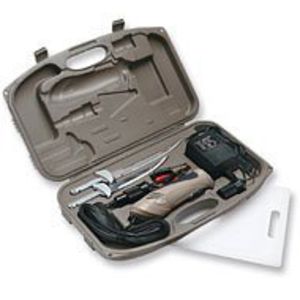 Having a way to quickly fillet a fish is important to many anglers and an electric fillet knife is a great way to accomplish this. One of the more popular brands is Rapala. We decided to look at their Deluxe Electric Fillet Knife Set

. According to the manufacture:

From what we've seen of the Rapala Deluxe Electric Fillet knife this is all true, however, the knife is very prone to breaking. So the Rapala will give you a great way to filet fish, it will only do so for a few dozen of them. If you are an angler looking for a good electric fillet knife we would suggest looking elsewhere than the Rapala Deluxe.

Buy This On Amazon!